Battery electric vehicles (BEVs) will play a major role in achieving future vehicle fleet targets for emissions such as CO2, NOx, and particulate matter. Especially in big cities, these vehicles may contribute significantly to keeping the air clean. Hybrid electric vehicles (HEVs) will also do their part in major cities, provided drivers charge their batteries via the power grid and not using the internal combustion engine. FEV has already developed transmissions for passenger cars and light commercial vehicles configured as BEVs as well as HEVs. 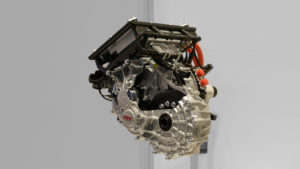 Fig. 1: BEV drive unit with power-shifting, 2-speed dual-clutch transmission for up to 300 Nm

Transmissions for battery electric vehicles are becoming more complex as the demands placed on them increase. The maximum driving speed attainable using the battery is rising continuously while demands on starting performance remain constant. These conflicting goals can be solved using high-speed electric engines or two-speed transmissions, but experience shows that such transmissions need to be power-shifting. Besides recuperation, there is a new requirement to have a neutral feature for disconnecting the electric engine from the drive wheels. Particularly at high revolutions and with P4 hybrids, the drag torque of perpetually energized electric engines has a noticeably negative effect. In other applications, the parking lock switches from the transmission to the vehicle braking system. Highly demanding vehicle installation spaces require coaxial construction of the electric drive. The product developer’s task is to limit this complexity and the rising product costs associated with it to an absolute minimum. It helps significantly to adopt subsystems from transmissions used in conventional powertrains. FEV takes this approach. 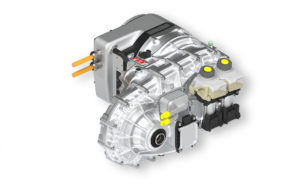 Fig. 2: BEV drive unit with power-shifting, 2-speed planetary transmission for up to 600 Nm

In addition to the one-speed transmissions already in production for BEVs and P4-HEVs, FEV also develops power-shifting, two-speed systems. Figure 1 shows a first-generation drive unit with a continuous output of 70 kW as well as a peak output of 90 kW using a 400-volt battery. The transmission was developed in-house by FEV. Our development partner, YASA, supplied the P400S electric engine, and the inverter was manufactured by SEVCON. Alternatively, the setup can make use of FEV’s own electric engine and inverter. The component that limits the torque is the mass-produced dry dual clutch. The corresponding electromechanical actuator also comes from mass-produced dual clutch transmissions for the powertrains of purely internal combustion engines. Using these commercially available subsystems makes development short and efficient, enabling market launch to take place quickly. The rotational speed at which the clutches rupture and their torque capacity, however, limit the applicability to the ranges indicated. The demand for higher driving performance is leading to a new solution, as illustrated in Figure 2. A planetary transmission with a Ravigneaux gear set is used to allow the electric engine to rotate at higher speeds and provide higher torque. These transmissions are quite common, with corresponding production facilities and equipment already available. In connection with this simple, reduced clutch transmission, two brakes are sufficient for generating two speeds. The exclusive use of brakes was an important criterion in selecting a design because, unlike ordinary clutches, they avoid the use of rotary transmission feedthroughs or slave cylinders to engage the gears, making them significantly more economical. Figure 2 also shows the oil pump and heat exchanger, which not only aid the gears but also help cool both the electric engine’s stator and the inverter. The electric engine with a built-in inverter belongs to a new generation of products developed by our partner YASA. The compact axial flow electric engine is also suitable for vehicles that have a narrow track width, such as relatively small construction vehicles and municipal fleets.

>> ON THE WAY TO THE LARGE-SCALE INTRODUCTION OF BATTERY ELECTRIC VEHICLE POWERTRAINS, HYBRID DRIVE SYSTEM TECHNOLOGY IS CRUCIAL TO BRIDGING THE GAP

On the way to the large-scale introduction of battery electric vehicle powertrains, hybrid drive system technology is crucial to bridging the gap. The section below introduces two solutions offered by FEV for transversely mounted engines.

Transmissions for P2 and Combined Hybrids 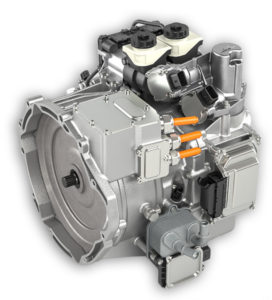 >> FOR FULL HYBRIDS, A POWER-ON-DEMAND ACTUATOR IS THE MOST IMPORTANT PREREQUISITE FOR OPERATING THE TRANSMISSION INDEPENDENTLY OF THE INTERNAL COMBUSTION ENGINE

The P2 hybrid transmission (parallel hybrid) illustrated in Figure 3 expands FEV’s dual-clutch transmission kit to include variations for input torques of 150, 250, and 350 Nm for the transverse engine. Every transmission uses wet dual clutches and exclusively needs-based actuators. For full hybrids, a power-on-demand actuator is the most important prerequisite for operating the transmission independently of the internal combustion engine. FEV’s experience shows that the P2 hybrid with its numerous functions represents a very good solution. The model shown here, based on the 350-Nm version of our dual-clutch transmission kit, also makes use of transmission subcomponents readily available on the market. The electric engine being used delivers 50 kW of continuous power, plus 100 kW for a maximum duration of 30 seconds. The length of the transmission, extremely important for a transverse engine, is 440 mm. For a six-speed version, the length can be reduced to 415 mm. Six speeds are sufficient for most vehicles because the torque of the electric engine is essentially available from a standstill, enabling selected gear ratios to be higher. However, even a six-speed version is not a solution for vehicles with extremely tight installation space. That is why FEV has devised another concept that combines the advantages of a P2.5 and a P3 hybrid. These types of hybrids have an electric engine mounted parallel to the electric engine, a big advantage for the package (Fig. 4). With a P2.5 hybrid, the electric engine is coupled with one of the dual-clutch subtransmissions, but it has the disadvantage that the rotor’s inertia needs to be synced up by the gear synchronizers during shifting. The electric engine must be actively synchronized each time the corresponding subtransmission shifts gears. To avoid that, on this kind of hybrid, the electric engine can be disconnected from the subtransmission and connected to the transmission output as a P3 hybrid. This takes place by way of an additional gear shaft with a shifting mechanism. Compared to the P2 hybrid, this combined P2.5/P3 hybrid, with total torque of 350 Nm, is 50 mm shorter that a six-speed, P2 hybrid. 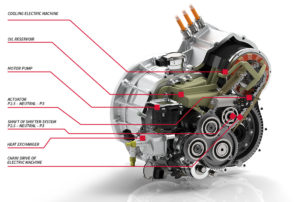 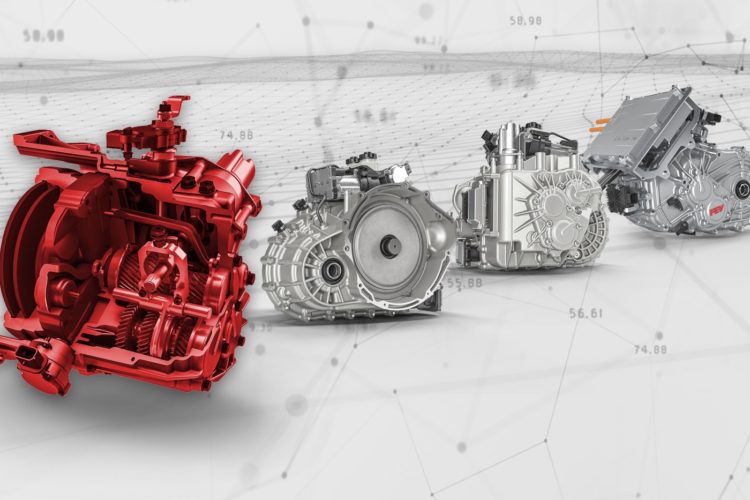