Engine measures as well as a special exhaust aftertreatment system have been developed to reach CO2 emissions below 98 g/km in the NEDC and below the EU6 emission limits by a margin of 10 percent. These impressive results, obtained during performance of the EU project POWERFUL, were realized in a VW Golf Variant test vehicle and were analyzed over the NEDC as well as in more dynamic driving cycles on both a chassis dynamometer as well as on public streets. A Volkswagen AG developed 3-cylinder TDI® engine with a displacement of 1.4 liters was used, which features an optimized high pressure injection pump, a ball bearing turbocharger, steel pistons, combustion control and a decoupled auxiliary belt drive.

Additionally, a homogeneous combustion process (LTC = Low Temperature Combustion) was activated in certain engine operating regions and a special fuel mixture was used. With these measures, a CO2 emission of 95 g/km and fulfillment of the emission targets was achieved. The calibration was also optimized using a target-orientated calibration process.

The Institute for Combustion Engines at the RWTH Aachen University (VKA) and FEV developed an innovative aftertreatment system to support this project, that consists of a conventional close-coupled DOC/ DPF combination, an exhaust gas reformer, a Lean NOx Trap (LNT) in an underfloor position and an SCR catalyst downstream of the LNT. The SCR catalyst stores NH3 generated during the regeneration of the LNT and, thus, reduces the remaining nitrogen oxides (NOx), downstream of the LNT.

A bypass is included in the system as an additional special feature that can be activated by exhaust flaps and pass the exhaust flow around the LNT and directly to the SCR catalyst. This happens when the LNT needs to be regenerated. The required rich gas mixture was generated by a reformer in the POWERFUL project, which is simulated by a gas bottle in the test vehicle. The figure above shows how the EU6 NOx emission limits can be clearly undercut in NEDC and WLTC. In random cycles, representing real driving conditions and carried out with soft, normal and aggressive driving styles, a clear correlation between NOx and CO2 emissions is visible. With application of a moderate driving style, the CO2 emissions are even lower as in NEDC, combined with safe NOx compliance. With a more dynamic driving style, fuel consumption increases significantly and NOx emissions exceed the limits.

The research that lead to these results was made possible through funding from the European  Union 7th Framework Program [FP7/2007-2011] under grant agreement No. 234032. The  authors are grateful for the funding provided by the EU in the “Powerful” research project as well as to all of the people who contributed to the study that was conducted in the author’s R&D laboratories.

The figure shows the CO2 emissions (above) and NOx emissions (below) in various cycles. 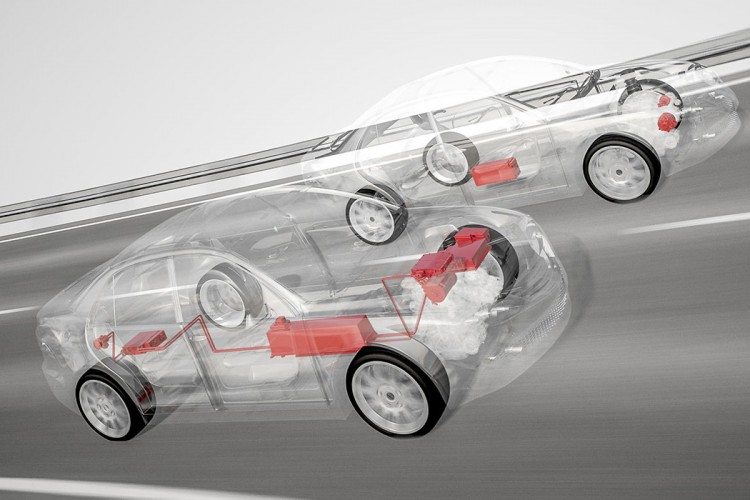