The coming years will see arguably the most radical changes in motorized, individual mobility: the acronym CASE – Connected, Autonomous, Shared, Electric – includes trends that will change, or even turn on their heads, many core aspects of the automobile, from the powertrain to usage and the business model.

In this regard, autonomous or fully automated driving particularly begs the question of the right path for automotive manufacturers. Is an evolutionary or a revolutionary start the best solution? The answer to this question depends on the individual constraints of the company. Thanks to interdisciplinary skills and an agile consulting team, FEV helps its customers find the suitable path.

The search for the right path must begin with consideration of the individual starting point. Ten years ago, one thought exclusively of established OEMs or Tier 1 suppliers. This has changed to the extent that, in the meantime, IT companies (Apple, Google/Alphabet) and mobility service providers (Uber) have become central to the development of autonomous driving. In addition, new OEMs in traditional industrial nations or in BRIC countries have emerged that are muscling their way into the market without having previously completed the ADAS levels 0 to 2.

Along with the actual autonomous driving systems, the matters of connectivity and usage models have to be taken into account here; last but not least, so do the elements of classic vehicle construction, including the (increasingly electrified) powertrain, the bodywork, the driver workspace, and the chassis.

Step by Step: The Path of Evolution

Current vehicles have already achieved level 2 SAE classification in all areas. While the vehicle steers, brakes, and accelerates by itself, the driver is always required to monitor the situation and the surroundings.

Even on the evolutionary path, the achievement of level 3 – “Hands Off,” which is expected to take place in 2018/19, will lead to a revolutionary paradigm shift; on the one hand, as of level 3, the sovereignty for monitoring surroundings in the covered use case will no longer lie with the driver, but will be assumed by the system. On the other hand, the duration of the handover, during which the driver takes over control of the vehicle, is between 10 and 60 seconds. Consequently, this increases the requirements for sensor equipment, surroundings detection, and redundancy and reliability.

The sensor equipment and surroundings detection aspects have already been successfully covered as part of the FEV Center of Excellence “Smart Vehicle” – in customer projects, benchmarking, as well as in the development and test strategies for sensor and surroundings detection systems. The redundancy initially presents challenges for the system architecture and energy supply, and is closely connected to functional security (FuSi). In addition to years of established experience, FEV specifically strengthened itself in this focus area of autonomous driving with the acquisition of the FuSi specialist Etamax in January 2017. 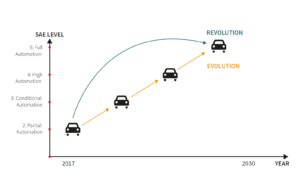 Gradual automation or direct start at SAE level 5: When choosing the right path, the individual starting point of the
company must be taken into consideration.

The next “revolutionary evolution” will come with the achievement of level 5: for the first time, the automobile does not require a driver workspace for any traffic situation. The automobile can drive fully autonomously in any situation, even without a driver or passengers.

Interestingly, this most visible change from the perspective of the (now former) driver does not lead to further radical steps in the electric/electronic/software systems environment. Even though the requirements for the sensors, the software functions, the availability and, last but not least, the functional security increase quantitatively, there are no further qualitative changes to the architecture, unlike during the change to level 3. On the contrary, some requirements no longer even apply: an obvious example are all hard requirements with regard to a secure and immediate takeover by the driver, which will remain in place up to and including level 4.
There are also optional changes in the overall vehicle concept: the elimination of a mandatory driver workspace, especially the steering, offers entirely new levels of freedom. Using these in a customer-effective manner requires innovative bodywork concepts.

FEV has recently reinforced the Vehicle business unit in a targeted way with the integration of the lightweight construction specialist Imperia, as well as the STEA design and packaging experts. This means that FEV can now also offer its customers interior and exterior design solutions from a single source and present itself as a global vehicle developer for current and future vehicle concepts. 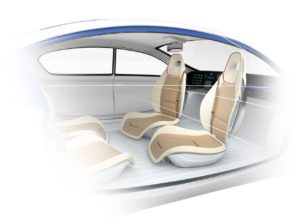 As part of automation and connection, the vehicle interior is transforming from the classic vehicle cabin into a full-fledged living space.

From Naught to Sixty: The Fully Autonomous Start

A revolutionary start in the world of autonomous vehicles actually requires starting with level 5: this is the only way to avoid short-term double development and to fully exploit the degree of freedom in design of fully autonomous vehicles without inherited problems.
The time and effort for the innovative ADAS/AD basic functions from level 3 – especially the surroundings modeling and the decision-making – as well as the time and effort for redundant architectures and the related functional security concepts remain comparable to the evolutionary path. Therefore, the time and effort for fully autonomous vehicles with regard to the autonomous functionality on the revolutionary path is mainly reduced to the application and integration in the generations with levels 3 and 4.
However, there is a lack of opportunity to gain experience with these; the direct start at SAE level 5 completely shifts the necessary validation and protection to the first implementation. This means that, under certain circumstances, systems with insufficient maturity are first used in vehicles in which the driver is completely excluded from the control loop; this prevents the driver from being able to take control in critical situations. Accordingly, a special focus is placed on an efficient and security-based test strategy.

In the field of software and testing solutions, FEV can look back on extensive experience in the validation and testing of software-based, security-critical systems, up to successful series release. In this context, FEV uses standardized methods and tools – already common practice in the development of powertrains and vehicles – in order to guarantee rapid development results as well as a high degree of validation. This process includes simulation and modeling tools, hardware-in-the-loop solutions, and automated testing. 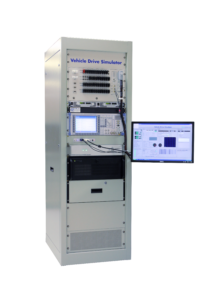 FEV uses standardized methods and tools in order to guarantee rapid development results as well as a high degree of validation.

For established automotive OEMs and Tier 1s, the evolutionary path from level 2 to 3 and 4 up to fully autonomous vehicles enables a short-term market entry as a leader or early follower. The establishment of entirely new vehicle concepts from Level 5 is not an obstacle to this, since the current concepts are typically already mature and their further development to market-ready, fully autonomous vehicles is possible with little time and effort.
With regard to the development of complex deep learning systems, new types of sensor concepts, and redundant system architectures, FEV is your qualified partner in areas that previously did not have this focus in the automotive world.
For new providers of individual mobility concepts, especially from the “new economy” field, the situation is different: the initial time and effort for developing a “traditional automobile” doesn’t seem justifiable in light of the expected market-readiness of fully autonomous vehicles as of 2026; the start on the market with fully autonomous vehicles is recommended.
Providers with core skills lying mainly in the field of software-based systems, especially artificial intelligence systems, will find FEV to be an expert partner for different aspects of the vehicle – from the chassis and bodywork to the powertrain and interior. 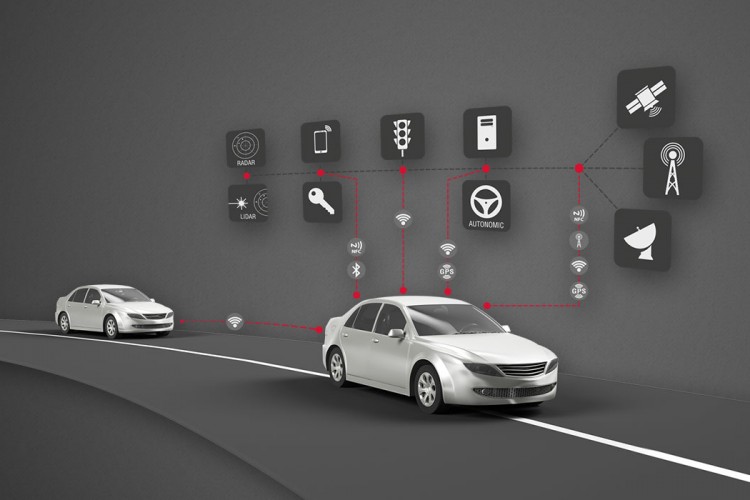 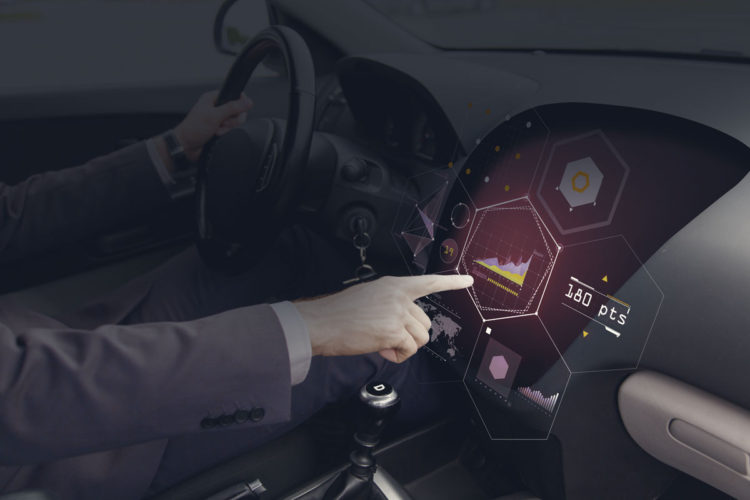 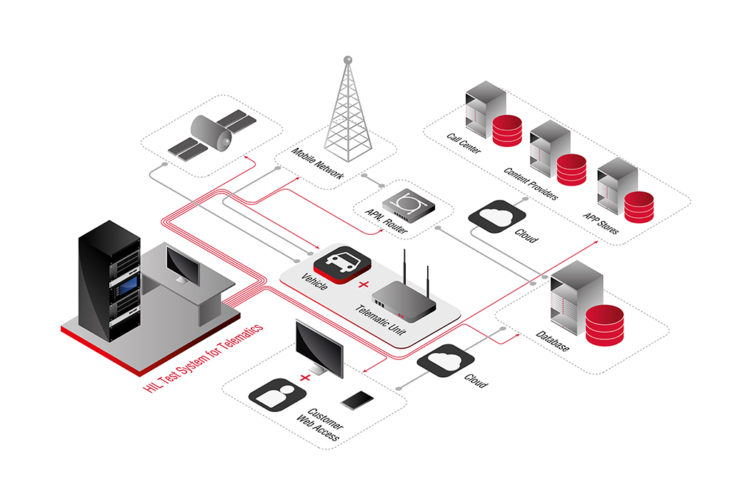