Gasoline engine powertrain development for 2025 and beyond is focused on finding optimal cost solutions by balancing electrification and combustion engine efficiency measures. At the same time, engine and vehicle platform strategies dictate the requirements for the highest specific power levels, with OEMs targeting 200 kW/l and beyond. Besides the Miller cycle, cooled exhaust gas recirculation, and the variable compression ratio, the injection of water is the ‘hot topic’ that has been investigated by FEV and VKA over the last two years.

Water injection has attracted increasing interest over the last few years as a way of addressing the following three topics: increases in efficiency, emission reduction by reducing enrichment demand, and performance enhancement. BMW has brought a first small series production vehicle to the market with the M4 GTS, which enables performance enhancement by the injection of water into the intake manifold.

Investigations performed by FEV and VKA over the course of the last two years provide deep insight into the fuel consumption reduction potential of an efficient high-performance engine concept featuring direct water injection combined with the above-mentioned technologies. Such an approach has ideal synergies with the variable compression ratio (VCR). VCR can compensate for higher knock limitations with a lower compression ratio if water injection cannot be used due to a lack of water or at low ambient temperatures. At the same time, a high compression ratio of 14.7 can be maintained up to the highest loads if water injection is possible. This enables the highest partial load operation benefits while preserving low fuel consumption at loads above the ‘sweet spot’ level.

>> BESIDES THE MILLER CYCLE, COOLED EXHAUST GAS RECIRCULATION AND VARIABLE COMPRESSION RATIO, THE INJECTION OF WATER IS THE ´HOT TOPIC´

In a first step, investigations were performed on a 400 ccm³ single cylinder engine. Here, fuel and water were injected via separate direct injectors. The direct water injection allowed for a high IMEP of more than 22 bar, which is quite contrary to recent trends with the application of the Miller cycle with increased geometric compression ratios and reduced peak torque levels.
A minimum indicated specific fuel consumption (ISFC) of 197 g/kWh was reached with a combination of water injection, the Miller cycle, and cooled EGR. At the same time, fuel consumption below ISFC = 205 g/kWh is achieved in wide areas of the engine map, especially towards lower engine speeds and high loads.

A 4-cylinder engine with a displacement of 1.6 l and a state-of-the-art friction level was selected for subsequent drive cycle simulations in order to understand not only the fuel consumption reduction potential, but also the water consumption for such a concept.

Water consumption of more than 3 l/100 km has to be taken into consideration for such a high efficiency concept with direct water injection. This requires onboard water generation—or at least the utilization of tap water for a refill tank—to ensure that the concept also makes sense from a cost-of-ownership perspective.

Further improvement of this direct water injection concept is expected with optimized spray targeting for the water injector. At the same time, the trade-off between fuel and water consumption will be assessed in more detail in further simulations. Moreover, future investigations with advanced ignition systems will depict the additional benefits that can be gained from this combination of technologies. 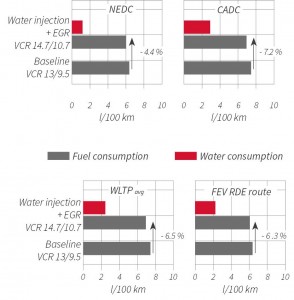 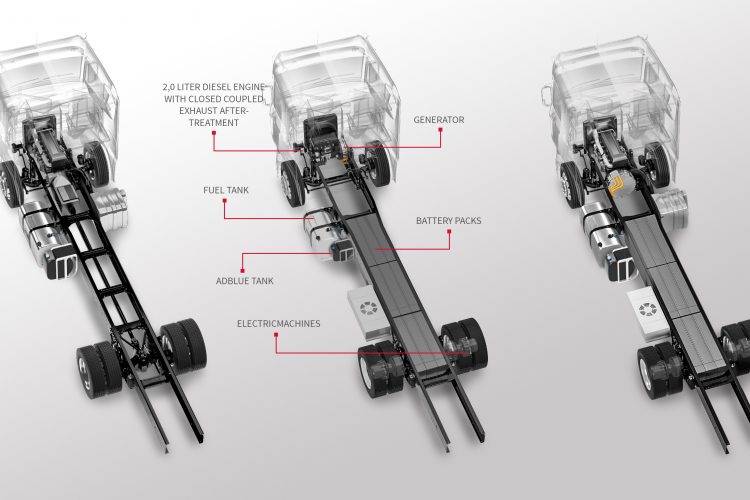