FEV’s model-based, collaborative development and validation framework meets the needs of development, test and calibration engineers facing the challenges of the new WLTP and RDE (Real Driving Emissions) cycles, e-mobility and autonomous driving. It has replaced cumbersome and complex methodologies using numerous different techniques and tools with a revolutionary cross-disciplinary approach: a scalable platform making it possible to size and validate the powertrain and its electronics at a desk before accompanying it through the subsequent phases, from the HiL and powertrain test rigs to the roads tests.

Developers are facing an increasing complexity of systems and a multiplication of powertrain variants while time-to-market is shortened more and more. In the past, this contradiction was addressed via frontloading of development steps in the sequential V-cycle of powertrain development and via raising the efficiency of testing facilities.

With the recent introduction of RDE cycles and the inclusion of e.g. temperature and altitude influences, the contradiction is even magnified and emphasizes the need for new approaches in powertrain development. Frontloading must be combined with a parallelization of development steps, thus leading to a multidimensional Road-to-Rig-to-Desktop approach.
A decisive enabler for this multidimensional approach is the exchangeability of models as well as a continuous improvement of these models between sequential and parallel development steps. Another challenge is the usage of linked benchmark, simulation and measurement data in the development. Against this background, FEV has developed a combined model-based development and validation framework with an effective information management solution.

This framework revolutionizes current development and validation processes. Until now, the processes were sequenced with separate development teams and stages and validation milestones at each stage. There were two reasons for this: first, the presence of physical prototypes bringing each validation stage to an end and second the inability of software tools to be cross-disciplinary from design to validation on the road, and thus to accompany the models and test procedures with any degree of precision to the test beds and the road. This is no longer the case with the FEV collaborative framework, which is based on the MORPHEE software suite.
MORPHEE was originally introduced as a test bed automation system with a smart, real-time data management capacity. Its original functions have been extended to include co-simulation, in its MORPHEE xMOD version for simulation activities: different models created via different tools, such as AMESim, GT-Suite, Dymola, Flowmaster and MATLAB-SIMULINK can interact on the same platform. It’s therefore possible to represent the different vehicle and engine components and to simulate their interactions. MORPHEE xMOD can be used e.g. to validate a new hybrid powertrain concept or to scale the air circuit of a new engine, its turbo and its EGR system by evaluating pollutant emissions and fuel consumption, etc.

In the subsequent stages (Hardware-in-the-Loop, Engine-in-the-Loop), the real-time MORPHEE are called on and in these stages, the physical components are introduced: These components include the ECU (engine control unit), the EMS (energy management system), the BMS (battery management system) and the internal combustion engine, the electric motor, the battery, etc. The physical components are combined with simulated models representing the vehicle, the driver or the road: at each stage, the physical component can be validated in an environment extremely close to that of the entire vehicle and to real driving conditions.

The major disadvantage at this stage is very often the necessity to simplify respectively downgrade the models, to ensure real time model execution at the test bed. As a result the tests become less representative. This is where the FEV framework, based on MORPHEE, distinguishes itself: FEV’s solution is 10 to 40 times faster than anything else available on the market. The precision of the model is retained in its entirety because even complex models can be executed in “hard” real time at the test bed. This framework has been used very successfully on numerous projects and has undergone constant improvement and enhancement. Dr. Hassen Hadjamor, Product Group Leader at FEV Software and Testing Solutions, explains the necessity of hard real time very clearly: “We’re facing an increasing complexity of hybrid and electric powertrains while challenging legislative WLTP and RDE cycles are introduced. Without executing complex models in hard real time, it is impossible to obtain precise results on the HiL or engine test bed: quick prototyping on the HiL test bed or calibrating ECU’s at engine test beds would no longer be an option. MORPHEE xMOD enables satisfactory results even under complex and challenging conditions.”

This framework offers a wide variety of applications. For example, V-CAP, the virtual calibration platform, can be used to calibrate ECU functionalities by means of simulation in accordance with the new transient WLTC, WHTC operating cycles thereby saving up to 30% of the physical tests.

The V-CAP virtual platform is a unique solution which can validate and pre-calibrate the powertrain ECU on the computer or HiL test bed, instead of on the engine test bed, vehicle test bed or on the road: it models all the physical elements of the test bed or road test (e.g. the combustion engine, its air loop and the exhaust gas aftertreatment system, the vehicle and its driver). This platform is unique, as the various tasks can be performed from a single PC and using a single coordination software, MORPHEE. This is the major innovation offered by V-CAP: it speeds up exchanges between the simulation, control, calibration and testing teams; it enables engineers to concentrate on their work and not on their tools; it reduces the risks of errors inherent when working with multiple software systems, thanks to the outstanding time-management capabilities of MORPHEE; it retains the initial accuracy of the models, thereby ensuring optimal representativeness of the tests. This results in a 3 to 10% difference in NOx emissions depending on DoE reference test repeatability, which meets the required performance level for calibration tests.

V-CAP comes in three levels of refinement. The first level is a pure software solution and is intended for developing ECU control strategies. The second level is incorporated into a base HiL test bed and enables for ECU calibration. In the third level, also the harness and the actuators are included at the full size HiL test bed. With allowing IO-tests, this level is already close to the later vehicle configuration.

To properly understand the advantages of V-CAP, we must compare it, for example on a HiL test bed, to a calibration process using simulation and without the FEV approach. While the usual process requires four CPU and five different software tools (a simulation tool, a calibration tool, an automation tool…), FEV’s solution uses only one PC and one software for all these operations, in addition to that used for the application software. All these tasks are performed within MORPHEE, which is simple and intuitive to use: the models, HMIs, tests and all the other elements are kept throughout the process, from the MiL (Model-in-the-Loop) to the HiL. They can also be kept subsequently on the engine test bed and vehicle test bed.

The VCAP HiL cabinet is available as a standard FEV solution: As such it is available in a trolley version connected to the ECU, and also to other accessories (e.g. injectors, throttle, EGR valve and the actuator of the turbocharger) on the version including the engine wiring harness. The cabinet includes all the FEV (MIO) input and output and simulation signal modules, including common rail pressure, intake air pressure, particulate filter pressure, the position of camshaft and crankshaft e.g. catalytic converter inlet and outlet temperatures.

If a customer already has a hardware solution which he wants to keep, V-CAP is flexible: the MORPHEE software can interface with it. Other scenarios: the customer has a calibration or automation system which he has been using for years, and he wants to keep it to avoid disruption to his test bed teams. In this case, MORPHEE can exchange with his systems, most of which it knows well.

V-CAP can also be offered as a standalone solution where the user would be responsible for integrating his own models, or alternatively he could use our powertrain engineering service: the teams at FEV have been using extremely elaborate models for years, for example for combustion, the air loop or the exhaust gas aftertreatment system. FEV provides a full know how transfer to allow the customer to realize the creation and the integration of new models. 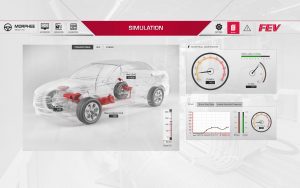 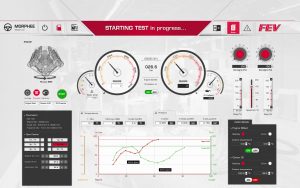 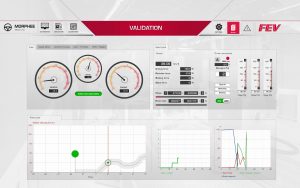 The Collaborative Framework: Benefits at a glance 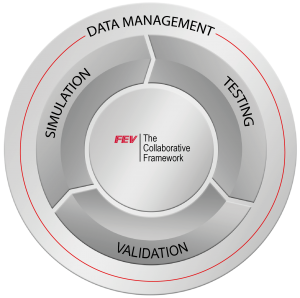 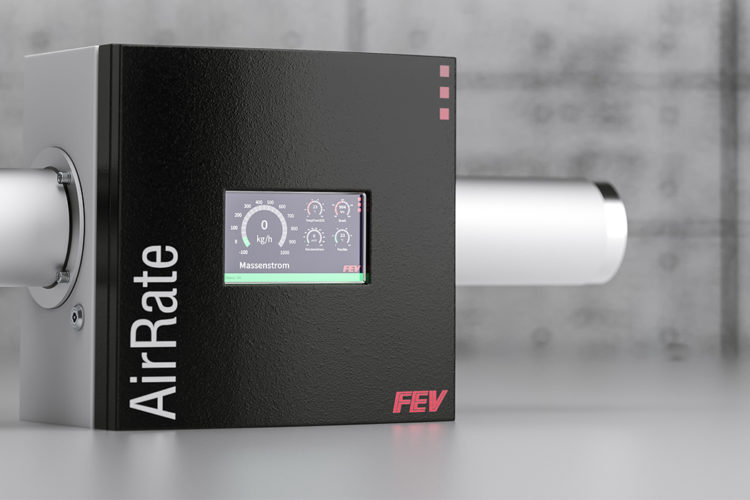 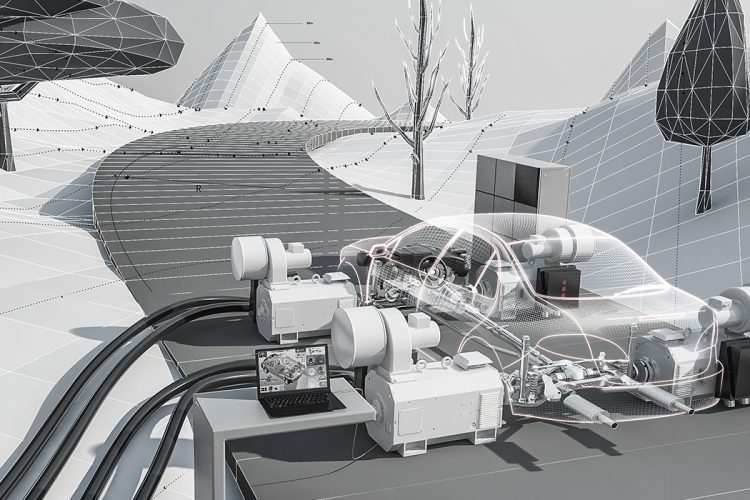 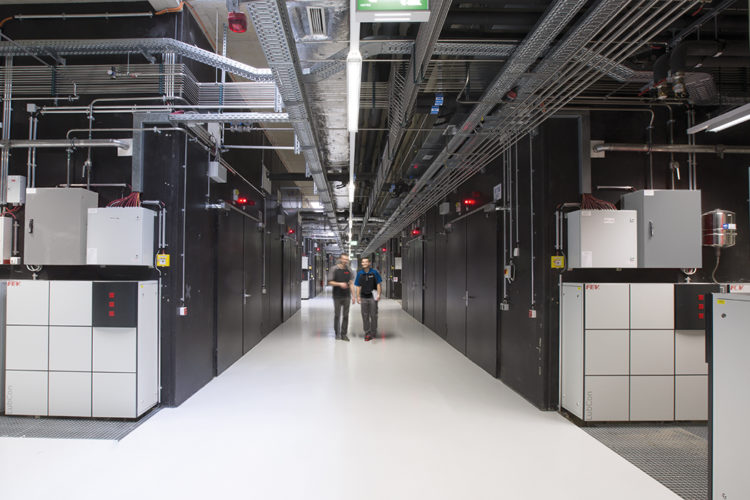