Today’s state-of-the-art, automated gear set synthesis for planetary structures showed solutions with which big leaps forward in terms of effort vs. degree of functionality in gear set utilization are achieved. Future dedicated hybrid powertrains (DHT) require all hybrid functionalities within a compact gearbox structure. FEV has extended its planetary gear set synthesis by considering two inputs on one planetary gear set, while considering other constraints, such as protection for on-demand, actuation-friendly structures. This design philosophy was further elaborated by FEV´s well-known ePGS structure for efficient launch with a single E-Motor.

By considering total system requirements in the very first phase of gear set synthesis, new planetary structures can be found which can significantly reduce all main energy losses in a modern automatic transmission (clutch losses, actuation losses, creep and launch).
PREX3 is an example of one such solution, setting new benchmarks in terms of both energy consumption and gear set utilization and truly integrating the powertrain electrification with a 48V hybrid or, optionally, an HV hybrid solution in the same transmission.

In 2003, FEV presented the world´s first diesel hybrid vehicle. This vehicle already had a highly integrated, oil-cooled E-Machine in the transmission and used ePGS as a launch device. In the next few years, many hybrid programs based on the ePGS-principle followed, and in 2010, FEV presented a seven-speed, planetary hybrid transmission with electromechanical, on-demand actuation. In 2016, the first mass production application using ePGS was launched in the Chery Arrizo7e PHEV vehicle.

Analyses of current, state-of-the-art transmissions show that, for over 80%, today’s losses in automatic transmissions come from three sources: hydraulic oil supply, drag torque and energy loss during creeping. For the development of the PREX3 FEV engineers successfully addressed all three items.
Development of the conventional planetary gear set structure was conducted by abstracting the PGS to a lever diagram and combining these levers. This is a largely graphical method, which requires high levels of expertise and abstraction. Good solutions must then be detailed using stick diagrams to show realization friendliness in hardware. Newer methods use CAE programs, which basically scan through the entire theoretical/mathematical solution room, thus analyzing billions of solutions. This requires smart methods of accepting or rejecting solutions, which include the risk that the optimal solution was found mathematically but rejected by the automated analysis. These programs are typically designed for one input and one output.

FEV combined these methods using a graphical screening to narrow down the solution matrix, which was then followed by automated calculation. With the graphical part, further constraints, such as considering two inputs or rejecting structures which are not realization friendly, were also implemented. FEV developed constraints to ensure that the gear set found could be actuated on demand – for example, allowing only one clutch to be nested in-between the planetary gears. This is visible on the stick diagram level, and was converted from the lever diagram level. A first result of this synthesis is FEV PREX 3, which is described in more detail in the following pages.

The latest member in FEV’s hybrid transmission family is the PREX3, the structure of which was specifically optimized for mild hybrid solutions. By using three planetary gears and six shift elements – in total, six forward gears for the combustion engine and three forward/reverse gears for the E-Motor – a mechanical reverse gear and ePGS vehicle launch were realized. By the gear set constraints this system could be further optimized.

In the gear set synthesis phase, constraints were introduced to ensure that only one clutch is located between the planetary gear sets (CL3). This clutch can be actuated through the center of the gear set by a pull actuator. Furthermore, two shift elements are never used at the same time AND have a gear in between them in which they are free (B1 and B2). This allows a reduction in friction elements by replacing the two brakes with one brake, combined with a dual-dog clutch. Furthermore, the shift element B3 is only used in the 1 and R gears. In these gears, only limited coasting capability is required, since a torque converter transmission also never locks up in R and 1st gear coast. Hence, this active element can be replaced with a passive, one-way clutch. In the rare event where coast is required in first or reverse gear it can still be realized using the E-Motor. With an optimized clutch arrangement, the number of friction elements can be further reduced to only four elements , thus setting a new benchmark in planetary gear set structured transmissions. Coast functionality is now limited to E-motor torque, which is more than enough in these low gears.

Clutch Losses in the PREX3

As indicated earlier, one of the three main energy losses in an automatic transmission are drag losses caused by open shift elements. Here, the non-optimized PREX3 is on par with “normal” planetary structures, which do not allow two power sources. Hybridizing those systems means adding at least one more shift element. With the optimized clutch arrangement as described above, the number of open friction elements is drastically reduced to half, compared to today´s state of the art.

The second main source of energy losses is hydraulic oil supply for clutch actuation. PREX only has five connections that need to be controlled. Two of those are realized as brakes at the end of the gear set, and can thus be actuated with existing electrohydraulic or electromechanical systems. Two further elements are clutches connecting the input. Here, existing actuation technology can also be used. The only remaining clutch in the gear set is actuated by a pull lever through the center shaft and an actuation piston in the back of the transmission housing. With this architecture, all shift elements can be actuated by a leakage-free, on-demand system. For lube and EM cooling, a small centrifugal pump is used which is driven by a BLDC motor and can also be controlled on demand.

ePGS as a Launch Device

The last big energy loss in an automatic transmission is the launch device. In the launch device, energy is dissipated into heat by the clutch or torque converter during creep and launch of the vehicle. Here, PREX3 uses the well-known “FEV ePGS” principle, thus eliminating the energy losses in torque converter or launch clutch. During the first phase of launch, the E-motor is in generator mode, producing electricity instead of dissipating the clutch slip into heat. In the second phase of launch, the generated energy is sent back into the system as a boost, thus maintaining a virtual “torque converter amplification” all the way up to the synchro point, at which the system transitions to conventional parallel mode. With the chosen lever ratio, the energy generated in the first phase of launch is slightly higher than the energy needed to boost in the second phase of launch, thus resulting in a positive charge balance after launching the vehicle. 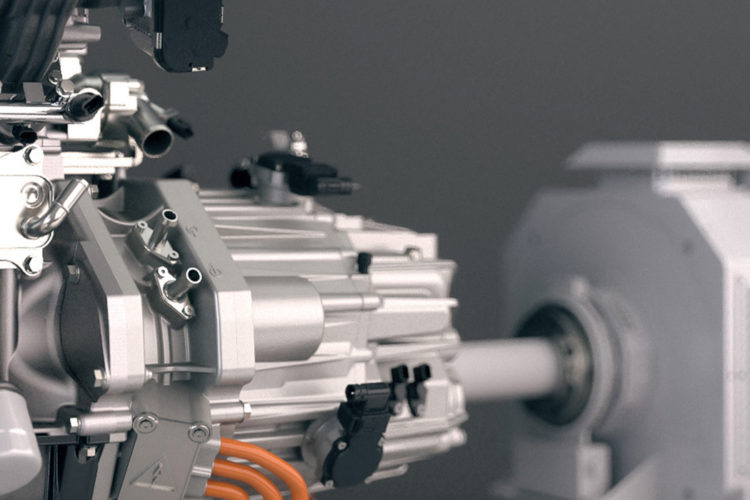